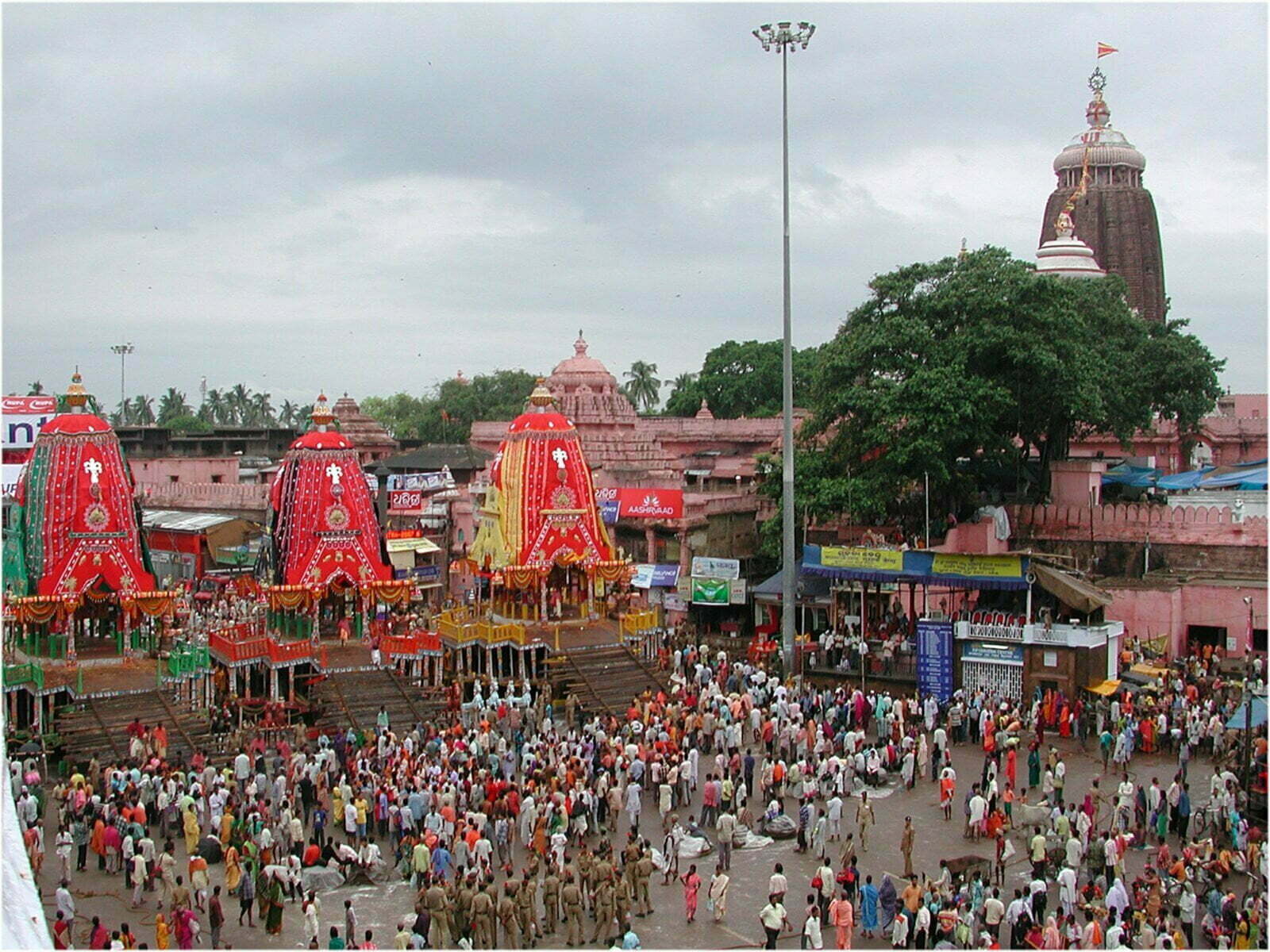 Above all The Shri Jagannath Temple dedicated to Lord Jagannath, a form of Vishnu, in Puri in the state of Odisha. How ever the temple is one of the holiest Vaishnava Hindu Char Dham. (four divine sites) sites comprising Rameswaram, Badrinath, Puri and Dwarka. Puri is a district head quarter and is just 60 KM from Bhubaneswar. It connect by both railways and national highway roads.

The present temple constructed in the 12th Century by the Ganga dynasty king Anantavarman Chodaganga. Puri Jagannath Temple built in the 12th century CE, as suggested by the Kendupatna copper-plate inscription of his descendant Narasimhadeva II. According to legend, King Indradyumna constructed the first Jagannath temple. He was son of Bharata and Sunanda. Mentioned in the Mahabharata and the Puranas.
As per legends, Lord Jagannath was a tribal deity, adorned by the Sabar clan of tribal people. As a symbol of Lord Vishnu. We know him as Neelamadhava, an image of Vishnu made of blue stone located in Nilagiri (Blue Mountain). The Puranic text Purusottama Mahatmya of the Skanda Puarana contains the origin of Jagannatha’s wooden idol at Puri. After that King Indradyumna sent his brother Bidyapati to discover Neelamadhava who secretly worshipped by Tribal King Biswabashu. Bidyapati married Biswabashu’s daughter with the intention of locating Neelamadhava in order to bring King Indradyumna for worshipping the deity. He was successful in locating Neelamadava but when Indradyumna arrived, the deity disappeared. Eventually, Neelamadav pleased with Indradyumna’s fervent prayer and appeared as huge wooden log floating in the sea near Puri. The deities of Lord Jagannath Balabhadra and Subhadra built from the same log by the celestial carpenter, Viswakarma.

Jagannath, Balabhadra and Subhadra trio of deities worshipped at the temple. The inner sanctum of the temple contains statues of these three Gods carved from sacred neem logs known as daru sitting on the bejewelled platform or ratnabedi, along with statues of Sudarshana Chakra, Madanmohan, Sridevi and Vishwadhatri. The deities adorn with different clothing and jewels according to the season. The three deities came to be claimed as the symbols of Samyak Darshan, Samyak Jnana and Samyak Charita usually regarded as Triratha (of the Jain culture), an assimilation of which leads to Moksha (salvation) or the ultimate bliss…

The Jagannath triad are usually worship in the sanctum of the temple at Puri, but once during the month of Asadha (Rainy Season of Orissa, usually falling in month of June or July), they are brought out onto the Bada Danda (main street of Puri) and travel (3 km) to the Shri Gundicha Temple, in huge chariots (ratha), allowing the public to have darśana (Holy view).

This festival is famous as Rath Yatra, meaning the journey (yatra) of the chariots (ratha). The Rathas are huge wheeled wooden structures, which are built anew every year and are pulled by the devotees. The chariot for Jagannath is approximately 45 feet high and 35 feet square and takes about 2 months to construct. The artists and painters of Puri decorate the cars and paint flower petals and other designs on the wheels, the wood-carved charioteer and horses, and the inverted lotuses on the wall behind the throne.

The huge chariots of Jagannath pulled during Rath Yatra is the etymological origin of the English word Juggernaut. The Ratha-Yatra is also termed as the Shri Gundicha yatra. Moreover, Starza notes that the ruling Ganga dynasty instituted the Rath Yatra at the completion of the great temple around 1150 AD. This festival was one of those Hindu festivals that report to the Western world very early. Friar Odoric of Pordenone visited India in 1316–1318, some 20 years after Marco Polo had dictated the account of his travels while in a Genoese prison. In his own account of 1321, Odoric reported how the people put the “idols” on chariots, and the King and Queen and all the people drew them from the “church” with song and music.

How to Reach Puri Jagannath Temple:

There are many ways of getting to India and then to Puri. It is up to your choice if you want an expensive and comfortable way or an inexpensive and less comfortable means of transportation. There are some options available below how to reach Puri, please choose the way you find the suits to you.

Firstly Puri is 60 km from the domestic airport which is in Bhubaneswar, the capital city of Odisha. Bhubaneswar connected by air with flights to major Indian cities like New Delhi, Calcutta, Visakhapatnam, Ranchi, Chennai and Mumbai etc. All major domestic airlines like Air Deccan, Jet lite, Kingfisher, Indian Airlines have daily flights to/from Bhubaneswar. The nearest International Airport is at Calcutta (Kolkata).
Travelers flying from Europe or America (east): The best way to reach Puri is to fly either to Calcutta (Kolkata), Mumbai (Bombay) or Delhi and then fly to Bhubaneshwar.
Travelers flying from Australia or California could fly directly to Chennai (Madras) or Calcutta (Kolkata) and then fly to Bhubaneshwar.